THE SHOWSTOPPER
The magician picks up an enormous magic wand and tells the children that it is faked...
He explains that objects disappear inside the wand and NOT up the magician's sleeve as everyone believes!!!
He removes one of the caps, puts some balls inside and replaces the cap
After a few magical gestures, the magician opens the wand again...but...the balls are still there!!!
What a pity...but it can't be helped...
This time, he puts a lollipop inside, explaining that the wand is capable of making things grow bigger...still no success...it just doesn't work...
Then, a stroke of genius and the solution to the enigma...
The wand is capable of 'transforming' objects...
The magician inserts a silk handkerchief, declaring that he will make it change colour...and...on removing the cap from the wand, an enormous snake springs out!!!! (1m.80cm long)
The children are highly amazed and amused!!!
And - a final touch- the snake has the silk handkerchief attached to its tail...but...surprise, surprise...it has changed colour!!!
THE TRICK HAS WORKED PERFECTLY!!!

Sorry, this product is NOT AVAILABLE 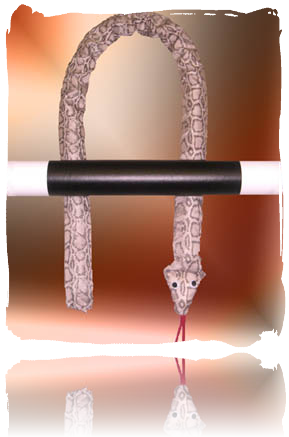